A lively group of girls play dodgeball at area of the compound; a few older girls stroll on the dusty paths with five litre water jerry cans on their heads; a group of adults make bricks by the roadside; a boy plays soccer at a nearby field.

These are scenes that greet us as we go into Kakuma Refugee Camp. It’s my first time in a refugee camp. I wasn’t sure what to expect, but these definitely aren’t the images my mind had created in its imagination. I have never really given much thought about refugee camps, and every time the words pop up, the images my mind conceives are those of huge camps with tents or temporary structures with crowds of people waiting. I never really get past that. I have not imagined what day-to-day life would look like in such a place.

A semi-aerial view of Kakuma Refugee Camp. The camp is divided into four sections. This is the fourth.

There is a buzz of activity on one of the streets as we go into the camp: boda bodas (motorcycles) ferrying people, shops selling all sort of things, and a line of girls selling mandazi (Kenyan doughnuts) by the roadside. There are also small groups of people seated outside shops minding their own business. This could very easily pass for a busy village near an urban town in Kenya, but the expanse of this settlement and the uniformity of the dwellings tell a different story.

Our first order of business at Kakuma is to review orthopedic patients at the Kakuma General Hospital, one of two big health facilities serving the camp. When we get to it, there are several buildings with waiting areas all filled up. From the mix of crutches, wheelchairs, arm slings, casts, and postures of different people, it’s an easy guess to determine which crowd is waiting for us.

We settle in and get started pretty quickly. Our first challenge is the heat. Kakuma is a hot place. Temperatures are around 34 degrees Celsius (94°F), and we don’t have the luxury of air conditioning. So, our bodies react the best way they know how: they sweat profusely. Armed with several water bottles and the sweat trickling down our faces, we start off the day. The minute the first patient comes into the room, a second challenge is obvious: a language barrier.

Patients wait outside the hospital to be reviewed by CURE doctors.

The languages spoken at the camp are as diverse as the places of origin of everyone in the camp: South Sudan, Sudan, Somalia, Ethiopia, Burundi, and Congo to name a few. Kakuma has been in existence since 1992 and serves more than 150,000 refugees.The first question for every patient who comes in is, “English or Swahili?” If they understand neither, then we have to find out what language they speak and find a translator.

Over the next five days, we listen and talk to 104 patients and their guardians. For each case, we try to find the best way to help. At the end of all these reviews one thing is apparent: there is a story behind each condition, cast, crutch, and wheelchair, each as unique as its bearer. All this gives me a different perspective of the camp. Hidden behind the everyday normalcy that meets us on the streets are the horror experiences and stories that no human being deserves to know. 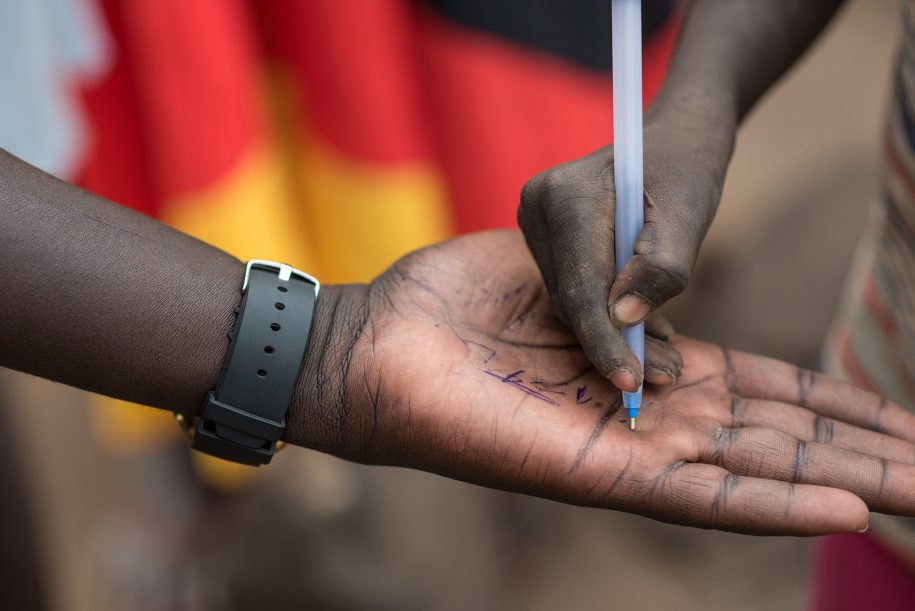 Siti, a surgery beneficiary, writes on the hands of a physiotherapist.

One of the very first stories we hear is a shocking and surreal one from a middle-aged man from Somalia who has a dislocated shoulder. He speaks just a few words in English, and so we have to find a translator. As we wait for the translator to come, we try to engage him in a conversation. As it turns out, using actions and a few words, you can communicate quite a lot. He decides to tell us the story behind his shoulder dislocation. Once he starts the story, he notices the bewildered looks on our faces, so he stands up and starts acting out in words. From his actions we know that he is definitely describing a bomb blast, where the bomb hits him from behind. He raises his shirt to show us a scarred back. It is hard to imagine how that must have felt for him when the wounds were fresh. The translator comes in when he is halfway through the story, and that is when we learn that he landed on a stone with his shoulder. He goes ahead to show us a bullet wound and tells us the story behind it, too. While this story sounds like it’s from an action movie,  it is real life, and this man has the scars as evidence of what he had gone through. He is grateful to God to be alive.

There is a huge need for healing at this place: healing at all levels and not just for disabilities. Different organizations around the world have been used by God to take care of the needs of this huge population. Through various partnerships, many of the needs of these people are being met to try and make life for them at this temporary home as comfortable as it can get. 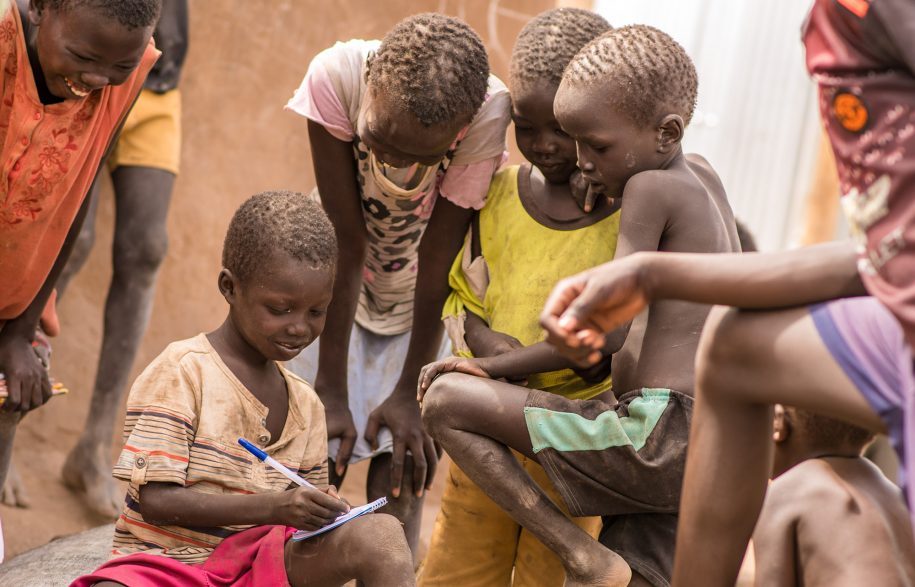 Siti shows his friends that he can actually use his hand to write.

Of such partnerships, some involve CURE. Over the years, CURE Kenya has partnered with AIC Healthcare Missions and Handicapped International to provide orthopedic care to children living with disabilities at Kakuma Refugee Camp. Since 2014, groups of adults and children living with disabilities have found their way to CURE Kenya in Kijabe for corrective surgery, which is about 600 kilometers (370 miles) south of the camp. During the period of existence of these partnerships, there have been some very interesting success stories, stories of healing, and stories of lives transformed. Families and individuals find hope in the midst of all the uncertainty that surrounds their lives.

“Now, I’m able to at least walk to school, attend classes, and play with my friends. I’m chasing my dream; I one day want to become one of those doctors who can do surgeries, and my area of interest is the heart.”

Nanjan’y tells me this when I meet her at her home in the refugee camp. She is one of the beneficiaries of the surgeries done through CURE. Back in 2014, before Nanjan’y had that surgery, walking was a challenge for her. If she tried, it would be with a very strained gait. She was not able to move much without support. Nanjan’y, now 16, went through a hamstring release surgery three years ago at CURE Kenya. She now walks with much ease. She is not yet able to run, but during our visit, we find her walking without support and playing with her sisters and the other kids around her home. 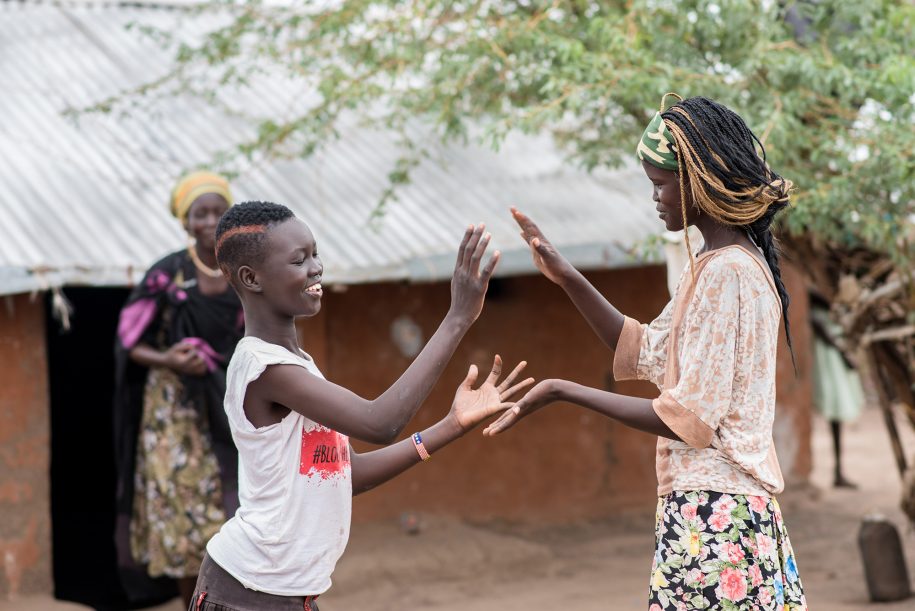 Nanjan’y plays a game with her sister outside their house at the camp.

This is just a glance of the impact on lives for families at the Kakuma Refugee Camp. The stories of lives changed through different corrective procedures are just as many as the patients CURE has screened and operated on.

As we left Kakuma five days later, I had a markedly different image of a refugee camp. As we drove through the dusty, dilapidated roads that are in Turkana, Northwest Kenya, the stories replayed over and over in my mind. Many of the people I had spoken to at the camp told me that they eventually hoped to go back to their countries, but not with the current, turbulent situations; a peaceful and stable government was their dream and hope. At the moment, it was their wish that life continued as near normal as possible: children go to school and become better people, they find things to do and make a living, and children play and learn.

Much has happened to make sure that all their wishes come true. Many visible and invisible hands are a being used by God to make sure the people at Kakuma Refugee Camp get the help they need. CURE is one of them and continues to be part of this great service to God and humanity. It’s everybody’s hope that by the time the dreams of a majority of these people come true, they will be a better people going home. 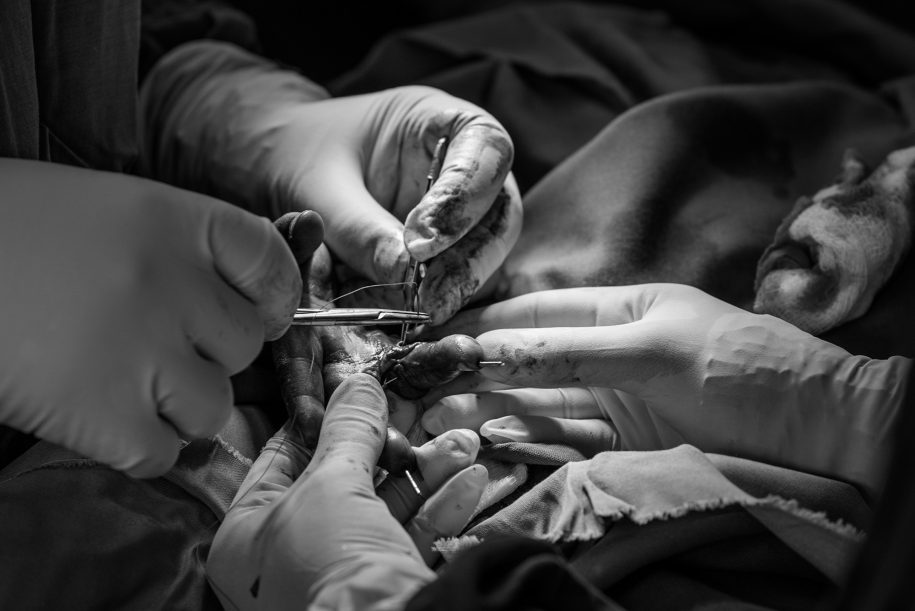 One of our surgeons performs a burn contracture release procedure at Kakuma.