“Never assume that loud is strong and quiet is weak.”

Peter spends his days ensuring CURE is a clean, happy place: clean because he is on the housekeeping team and happy because of the joy that he spreads. Peter is also hearing impaired. Peter communicates using a mixture of hand motions, sounds, and writing.

And almost everyday, Peter and Elvis have a special conversation. Elvis works for CURE. He’s one of our Storytellers. He and Peter, they’re like besties. Elvis understands Peter. We can say, “What did he say?” And Elvis will laugh and tell us all about it. 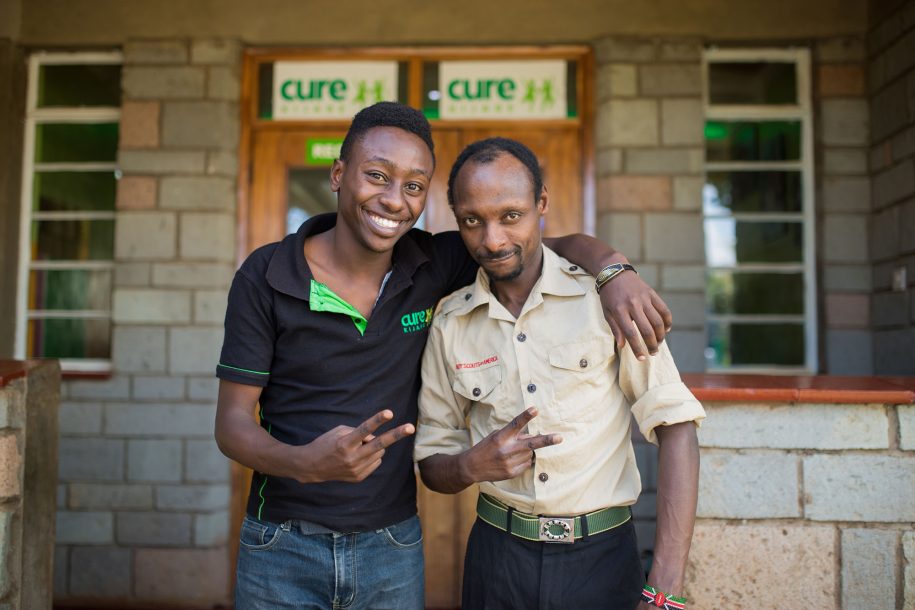 When we asked Elvis to describe Peter, this was his response: “Fun, funny, funny, funny. Very funny. Caring. Very straight up with people. If you upset him, he’ll tell you.  If he’s happy, he’ll show his happiness.”

As Elvis talked of Peter and the stories Peter has shared, he laughed. A lot. 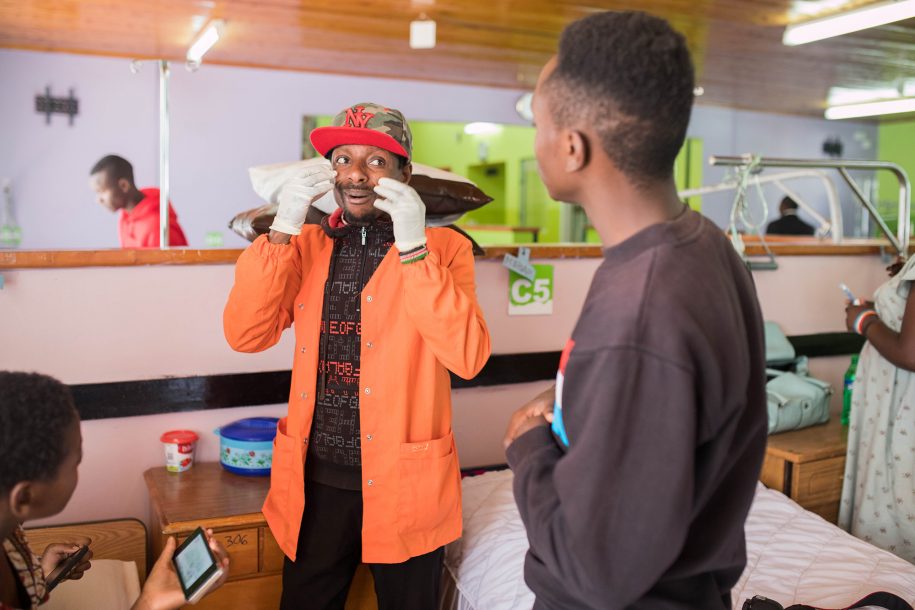 Peter has an animated conversation with Elvis.

But who Peter is, the ministry of joy and laughter he brings to CURE, isn’t because of the easy road he’s had in life.

Elvis shared with us that Peter used to hear and talk, but he was beaten so much by a relative that he lost his hearing. Elvis asked him if he’d forgiven this relative. “On his side, he’s cool,” Elvis explained. Peter even looks out for this relative when they are sick, taking them medicine, despite the fact that this person doesn’t really like him. Even though this family member and Peter have a struggling relationship, he gets along with many of his other family members and they love each other! 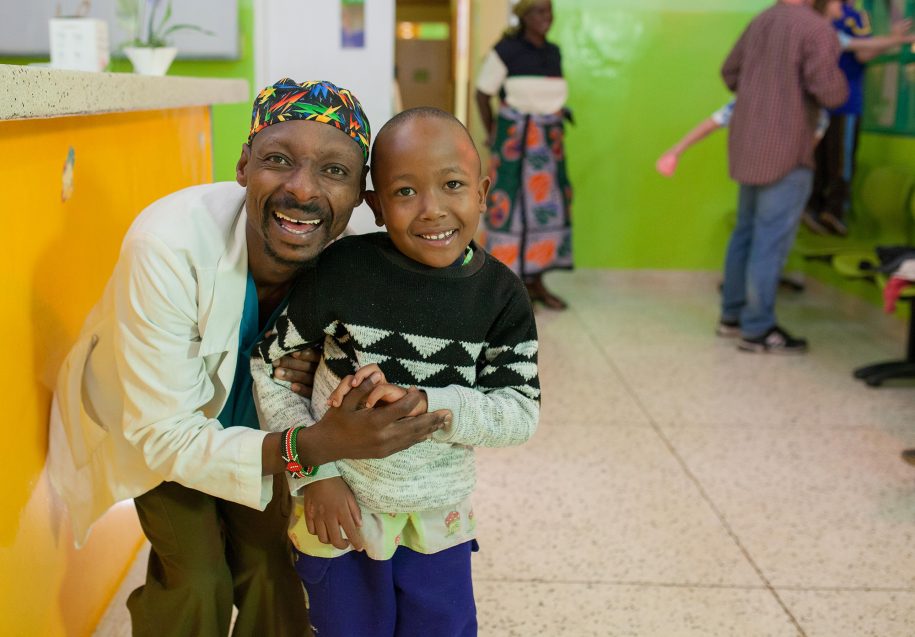 One day, we caught a patient excitedly running toward Peter to say hello. It was this patient!

“He was telling me about school,” Elvis shared. “He got to form two (10th grade) and then he felt like he was not getting anything out of the school. He was not understanding and things like that. He was in boarding school, so he escaped and walked from the school to Nairobi, and it’s quite a long distance. ‘Escape’ is a common word here ‘cause school is like ‘prison.’ You cannot leave.”

Three years ago, Peter started working for CURE. To this day, things happen to Peter that could easily cause him to be bitter and grumpy. But instead, he tells stories in such an animated way, it often makes people laugh! 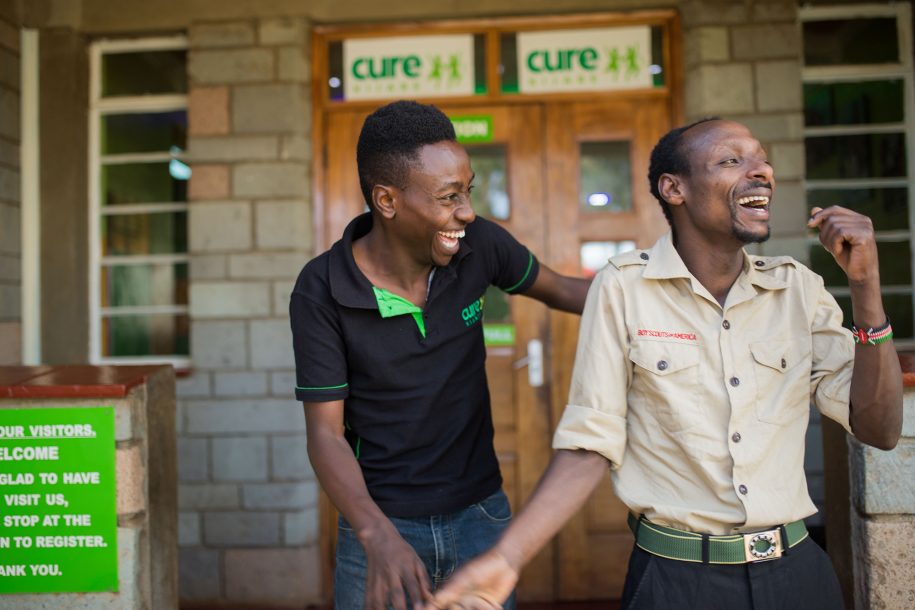 “Peter tells the best stories,” Elvis said. One day, Peter was asking Elvis if he had any extra clothes.

“He hung out his clothes to dry, and they got taken, all of them,” Elvis told us. And just recently, Peter had his cap stolen while at work.

“He wears it to cover it,” Elvis told us, referring to Peter’s receding hairline. Although you wouldn’t believe it to look at him, Peter is only 32. We ourselves were in such disbelief about it, we had to clarify with Elvis. “I am serious,” he said.

Elvis laughed with his whole heart as he told us a story of an unfortunate encounter that Peter had with a dog that bit him because he didn’t hear it coming.

“He came to work and asked for a sick [day] off, and he asked for a tetanus shot.” Peter needed to go to the hospital next door to CURE to receive the shot, and Elvis went with him. It was during this time that Peter relayed the story to Elvis, we’re certain with much animation.

“I don’t know where he was walking to that night, but he was walking. He can’t hear, and the dog was barking. So, the dog thought Peter wasn’t afraid of him. So, he bit him. Peter started running to the house!” 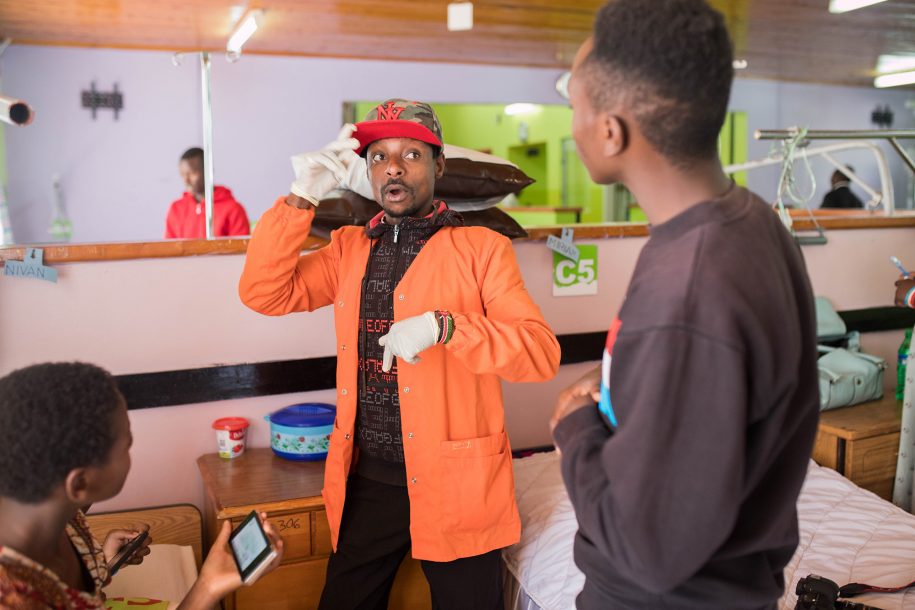 He also told Elvis a joke about his future spouse. “Peter says he wouldn’t want to marry someone like him because if the baby cries, who would hear it?”

Amidst all the trials and adventures, Peter just enjoys life. “Peter has a speaker in his house and he plays loud music,” Elvis shared. And… “Peter also dances. He can’t hear the music, but he sees people moving and he dances. Better than them!”

We often catch Peter with our patients, bringing them joy, too! 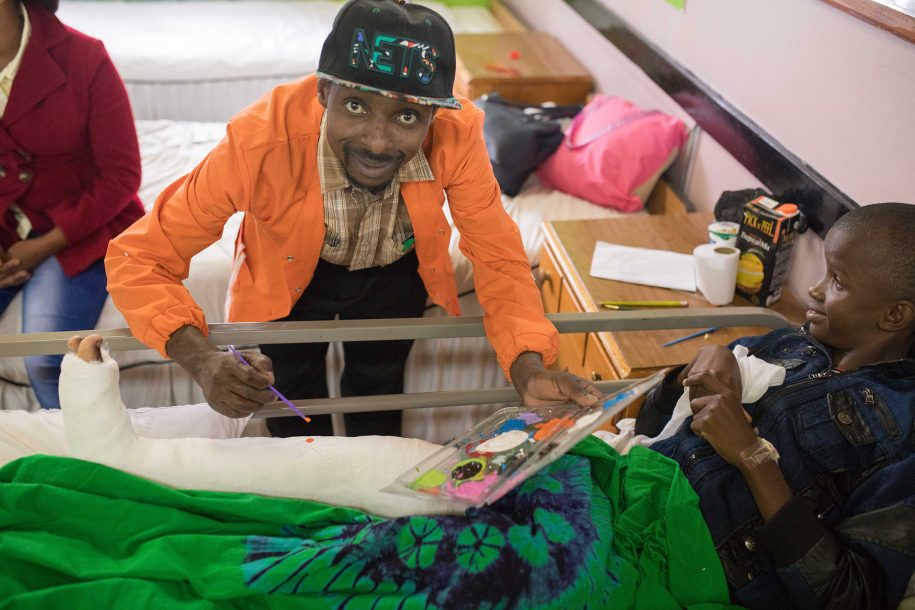 Another day, we caught Peter painting one of our patient’s casts.

It’s people like Peter who make CURE the place that it is. A place where patients feel loved, affirmed, and cared for. A place where staff smile and laugh amidst their work. And, ultimately, a place where God is glorified in any circumstance. 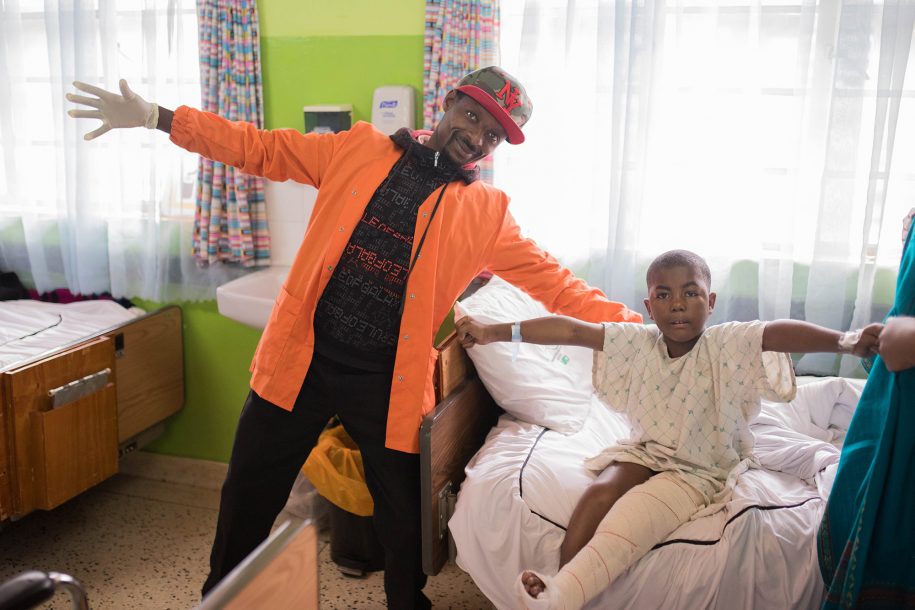 Nivan has struggled with a wound that isn’t healing very fast. He’s spent a lot of time at CURE. Peter and Nivan are friends. This relationship provides a crucial distraction for Nivan who spends so much time in bed as his wound heals