The dark is just a canvas

All January, I’ve been trying to implement a new discipline, a journaling exercise that pastor Jeff Manion gave our team at the 2017 CURE International Directors’ Conference. Part of the daily exercise is listing three specific things for which I’m thankful. Today, a song was on the top of my gratitude list. 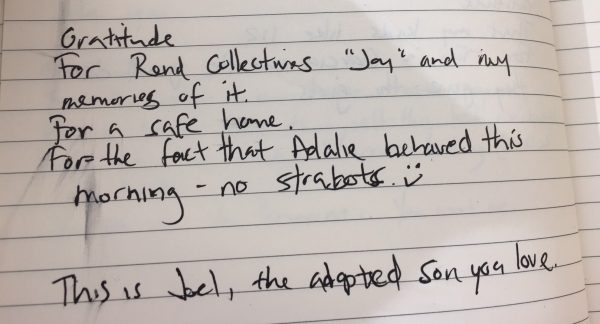 “For Rend Collective’s ‘Joy’ and my memories of it.” (If you’ve never heard the song, you can listen to it here or here.)

Rend Collective’s “Joy” was my tunes on the way to work today (on repeat), and the track got me thinking about CURE’s Core Values.

For reference, those values are:

First, briefly, about the song

In the United States, there are an incalculable number of things about “Christian culture” that don’t make sense and have very little to do with Jesus. This song isn’t one of them. It’s chock full of lyrics that are true and trustworthy regarding who God is, what He is like, and how He really does interact in the world.

Because of how I was introduced to it (at my daughter’s dance recital), and the composition of the song, I tend to think about “Childlike” when I listen to the track, but this week I’m reflecting on what it means to be committed to “Restoring the Broken” and how that reflects who God is.

In particular, I was captured by this line from the second verse of “Joy”:

The dark is just a canvas for Your grace and brightness.

In a multicultural society like the U.S., we try to avoid placing labels on people, and thinking about people as broken is one such hot button. For many, the term broken seems pejorative and exclusionary of those who face more noticeable challenges.

As a Christ-follower, I think of broken differently because I live in a daily reality that I am broken. This isn’t false modesty or hyperbole. I really am. I believe all people are, in some big and small ways, and therefore we are all in equal standing before God. That means that my/yours/our relatedness to God isn’t based on our behavior or how broken or fixed I might be at any given moment.

It means that God doesn’t love me because I’m good; He loves me because He is good.

Sidenote: recognizing this is the first step in starting and continuing a right relationship with God. It’s also the difference between being childlike vs. childish.

So why is this more than just “nice words?”

When any of us are in the midst of a “dark” season, axioms like “God has a plan” can fall flat, seeming like we’re lying to ourselves or “psyching ourselves out.” But here’s the thing: the statement from this song is one of the most true and attested things about who God is. The darkness really is a canvas for God’s grace and brightness.

Of the many things God is, He is a Restorer. In fact, I’ve come to believe that, if indeed God has “favorite things to do,” restoring broken things might be tops on His list; and because of that, who He is offers great reason for joy!

(Sidenote: I’ve written about this point before. Here’s one example.)

For the children and families we serve everyday at CURE, they know deeply both the darkness of living without hope for a cure and the brightness of the God of the Universe breaking through to offer true healing. We often say at CURE that the book of Acts, which records the acts of the first Jesus followers, is still being written. We believe that because we see new stories of Jesus’ healing work in the world lived out every day. Each week throughout our hospitals and program, God is at work through His people to heal and proclaim the best news ever:

The kingdom of God is right here! Now and available to you! And this is what it looks like! 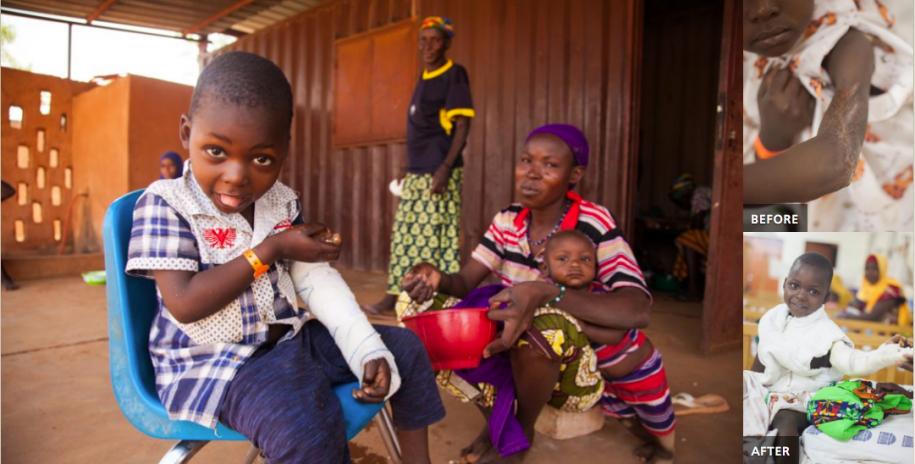 The number of examples we find throughout Scripture of God “painting” this picture would literally fill volumes were we to share them all, but for the purposes of further reflection, here are two: one from the Old Testament and one from Jesus’ life and ministry.

(Do yourself the service of reading the whole passage. Don’t just cherry-pick verse eleven 🙂 ) 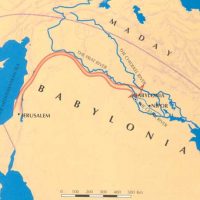 The Babylonians took Judah into captivity in 586 BCE

The people to whom Jeremiah was writing had just entered the darkest of dark seasons. After nearly 150 years of prophetic words from people like Isaiah and Jeremiah, God made good on His warnings and sent the world superpower of their day, the Babylonians, to destroy the Israelites capital city and carry off massive numbers of Judeans back to modern-day Iraq. Jeremiah’s letter of encouragement found a refugee people, resettled in a land 800 miles away from their desolated homeland. They had legitimate questions. Where is God? Does He still have power here in Babylon or was He just the God in Israel? Is He done with us? Will we ever see our homeland again? What should we do now? Is there hope to be found?

Into their darkness, God (through Jeremiah) paints a picture of hope—not just in what would come 70 years later but in the hope to be found in their circumstance.

“Also, seek the peace and prosperity of the city to which I have carried you into exile. Pray to the Lord for it, because if it prospers, you too will prosper.” Jeremiah 29:7

God wasn’t done with His people, and He wanted them to know it. There was a plan for them. He was (and I believe still is) at work through the grand sweep of history—and somehow, miraculously, simultaneously through individual lives—to restore all of Creation to Himself.

I’d encourage you to read that passage for yourself and ask the question, “What does this teach me about God and His ways?” Especially if you’re traversing a season of darkness, I think you’ll be deeply encouraged by what God might tell you about Himself through it. Restoration is a real specialty of His. 🙂

The story we encounter in John chapter nine could very easily be pulled from any Spiritual Director’s weekly report from a CURE hospital. In the places where CURE serves, The question of “why God allowed this to happen” is so often ascribed to one common factor…

His disciples asked him, “Rabbi, who sinned, this man or his parents, that he was born blind?” John 9:2

The question by Jesus’ disciples wasn’t based in a lack of education or superstitions. They repeated what everyone around them believed. Like our patients and their families in places like Malawi, it was their cultural soup, the reality that permeated their lives and affected everything about them (just as materialism and self-determination effect every part of American life). It’s what they knew.

In the midst of that culture that assumed sickness was “curse,” the result of punishment from the gods (or God), Jesus reveals something utterly countercultural, refuting their notions by saying something completely consistent with who He was and who God had always shown Himself to be: He, Jesus, the Eternal God, is the light, the brightness that illuminates a world full of darkness.

“Neither this man nor his parents sinned,” said Jesus, “but this happened so that the works of God might be displayed in him. As long as it is day, we must do the works of him who sent me. Night is coming, when no one can work. While I am in the world, I am the light of the world.” John 9:3-5

Not surprisingly, Jesus goes on to not only proclaim this truth about the kingdom of God but to heal the man born blind!

I’ve seen this passage, inaccurately extrapolated, lead some down unproductive (and I believe untrue) paths, believing that God intentionally makes all bad circumstances happen to play out some grand, theatrical production where He is the star. That’s not who God is; that’s not what Jesus is saying; and that’s not what this passage is about. As much as we’d like there to be an easy answer, there are many reasons why a season of darkness occurs. Sometimes it really is God’s will. Sometimes God makes good out of a circumstance that is outside what His best for life might be. Sometimes, we’re experiencing the consequences of our own poor choices. 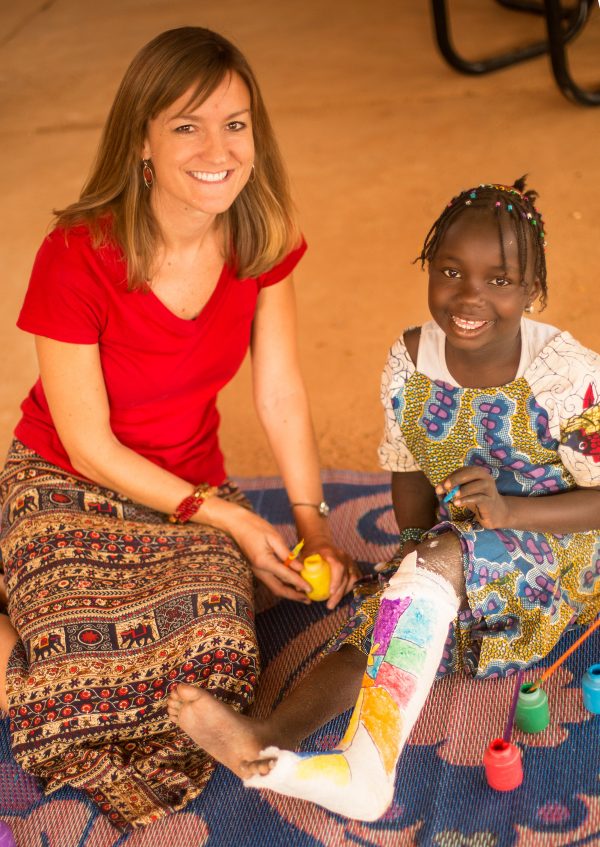 Turning casts into canvases is one more way the the staff at CURE Niger brightly declares the reality of the kingdom of God to the children we serve.

In all circumstances, what we can know about God (I would argue beyond a doubt) is that He is present in the darkness and He will use it to paint something bright and beautiful.

May we each seek Him, know Him, love Him, and be found in Him through the seasons of darkness and brightness, and may God bring His rescue to thousands more children with disabilities and their families through our work together.

Credit: Joel Witwer for the cover photo and pictures of Mathias.
Credit: Bryce Allen Flurie for the snaps of art therapy in Niger.