When I was offered the opportunity to lead a CURE U team on a trip to the Dominican Republic over Thanksgiving break, I never dreamed I’d have the chance to meet Jesus while kneeling at a hospital bed with plaster still drying on my fingers. 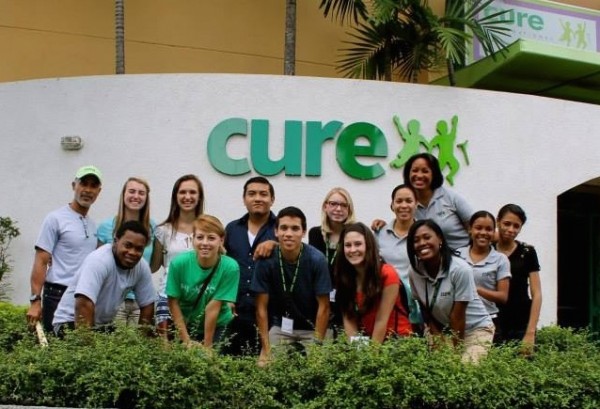 He had the softest brown eyes, almost as soft as his hand, which was slipped securely inside of mine. His three-year-old brow was furrowed, his forehead etched with a knowledge of suffering and struggle far beyond what seemed warranted by his age. 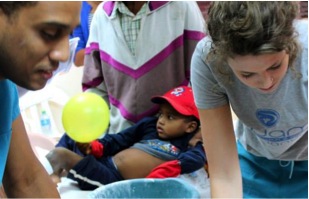 He wore a red baseball cap and a t-shirt smudged with the same dirt that graced his cheeks. In a room surrounded by buzzing hospital instruments and the shrieks of crying babies, he didn’t make a sound. He was still, silent, and strong.

I met him at the clubfoot clinic held weekly at CURE Dominican Republic, a free clinic that offers healing to children who would otherwise face a grim future. On the day of the clinic, families arrived early and the hospital filled quickly.

Amidst the hustle and bustle of the morning, I took a moment to pause and absorb this place and these people. As my eyes scanned the room, I was overwhelmed by what I saw – four walls filled to the brim with beautiful, broken people, each fulfilling their roles as integral pieces in this picture of the Lord’s kingdom.

One section of the room held families with their fingers interlaced with one another in prayer. Another portion housed doctors cutting off old casts, skillfully and tenderly removing restraints from tiny feet to reveal the glorious new creations hidden beneath the gauze. I was standing there taking it all in, when suddenly an orthopedic technician grabbed my arm. He led me over to the table where Dr. Rowe was applying casts. The technician simply smiled and handed me a pair of gloves.

Dr. Glen Rowe is both the resident orthopedic surgeon and the Medical Director of CURE Dominican Republic. He possesses a uniquely humble and selfless heart with an unrivaled passion for service. As I approached his procedure table, he motioned me into the circle of staff. He began to examine the patient and explain the current angle of the boy’s foot. He observed the corrective progress thus far and detailed what the remainder of his treatment would look like. He showed me where to place my hand on the boy’s toes and knee and how to hold it still as he began to wrap the wet cloths around the foot and then the leg.

While Dr. Rowe continued explaining his actions out loud, I found myself watching the face of the gentleman on the other side of the table. The soft wrinkles around his eyes and mouth hinted that he was well past the years of fatherhood. I asked. The child was his grandson, he explained. The boy’s parents couldn’t care for him.

The little boy’s gaze remained constant, his pulse calmly beating against my palm as his grandfather continued sharing his story. They had taken a three-hour bus ride to get to CURE by eight o’clock that Wednesday morning, a process which was now their weekly routine. “What can I do?” he choked out in Spanish, “my grandson needs me. This is his chance.”

Unable to work, he and his wife are doing the best they can to provide for their grandson, making sacrifices now to ensure he won’t have to later. This was their fourth week of casting at CURE, with four or more treatments to go before the necessary tenotomy and fitting of braces for long-term maintenance of his clubfeet.

The boy’s grandfather nodded as my fingers stroked the white-wrapped legs and my broken Spanish assured him that the plaster was now set. Dr. Rowe prayed blessing, protection, and healing over the boy and his family. Then, the weathered man who pierced me with those same soft brown eyes and strong spirit, reached down, picked up his grandson, and rested his newly casted legs gently onto his own hip. As they turned to go, I realized I’d never even asked the child’s name. “Señor!” I called after him, “que es el nombre de tu nieto?”

He stopped and turned – this man who is living a life defined by much struggle with such strength. He looked into my eyes, his wise, old heart connecting with mine, still so full of naivety. And he smiled. The name passed his lips and my heart leapt to my throat.

With the words of Matthew 25 running through my mind, I heard him answer, “Jesús. The boy’s name is Jesús.” 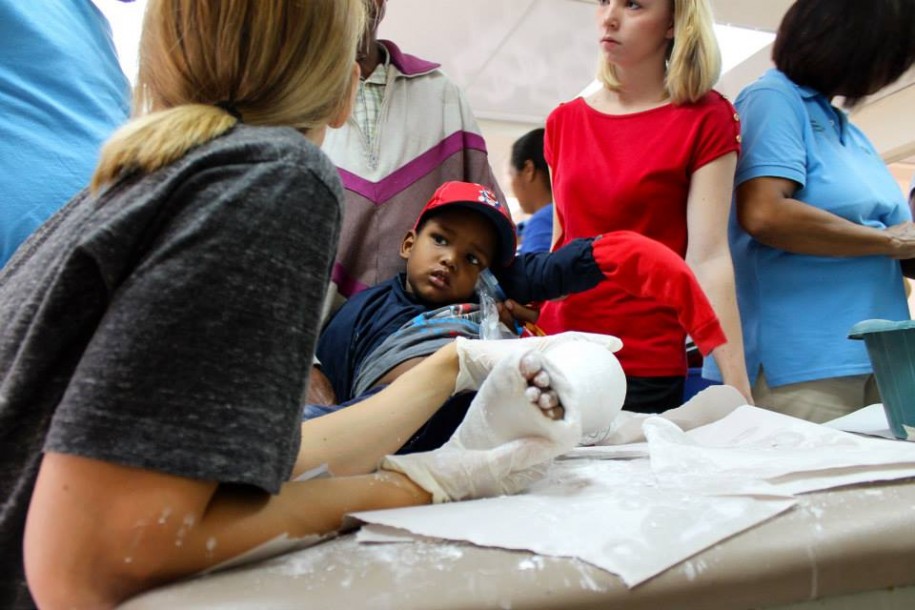 “Truly I tell you, whatever you did for the least of these brothers and sisters of mine, you did for me.” Matthew 25:40

And I found him in a hospital room in Santo Domingo.