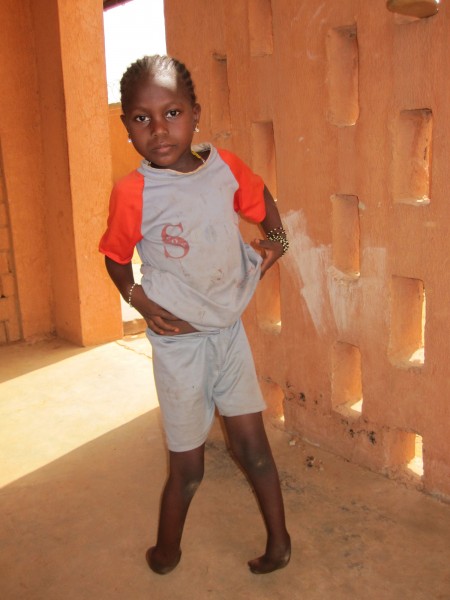 She is so tough that her crippled feet did not keep her from walking. It just meant she had to find a new, creative way to walk. Her feet were so overextended that she was forced to walk on the tops of her feet. It was a struggle and it was painful, but she did it for years and years.

One day, Rahila’s mother heard about the CURE hospital. She brought Rahila to see if she could be treated and was so happy because the answer was yes. She was told that Rahila could be healed, but it would require multiple operations on her feet, followed by a series of casts and a grueling period of physical therapy. It would also require self-discipline. If Rahila wanted her feet to be healed, it would take a lot of work. Rahila’s mother didn’t bat an eye. She knew if anyone could do it, it was Rahila.

It was a year-long process. After several operations, many sets of casts and intensive therapy, Rahila’s feet were changed. She was learning to walk on the bottoms of her feet for the first time ever at the age of six. Like I said, Rahila is tough. She is physically tough, but also emotionally tough. She decided very early on that she would not be affected by the ridicule she faced and that she would ignore the mockery. Her mother told us that they had a name for her in her village – “Rahila the cripple.” She heard it every day, every time she went outside. But she ignored it. She built calluses around her heart just like she did on the tops of her feet.

I had the privilege of working with Rahila in the art therapy program for the duration of her stay at the hospital. I spent hours, days, and months with her before I ever saw a smile on her face. There were times when I sincerely doubted the effectiveness of our time together. She was always friendly, always willing to come to the art therapy room for her sessions, but she was emotionally distant. There is nothing like working with a child for such an extended period of time with no breakthrough to make you feel like a miserable failure. But all of that time spent together was not a waste. It did have an effect on Rahila. It did change her, and the change seemed to come out of nowhere, literally accompanied by an array of colors. 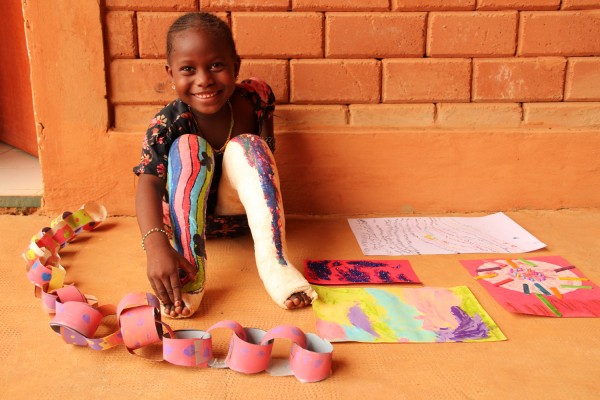 For a long time she would allow me to paint her casts but wasn’t very interested in painting them herself. She would sit and make marks on a piece of paper while I painted her cast. Then one day, she decided she wanted to paint her casts, covering them with every color she had in front of her. From that point on, she was so excited each time she had a new set of white casts and was always ready to decorate them. She started smiling and seemed so much more comfortable during our sessions. She even started acting silly.

Throughout the process, the casts became a part of her emotional healing as well as her physical healing. Each new set of casts was another step in the slow and painful process of molding of her feet. When she painted them she was, in a sense, taking another step toward accepting what she had been through and acknowledging the difficulty she had faced, both in the hospital and in the outside world. She seemed to be mourning the losses she had experienced but also moving past them and allowing herself to see how far she had come.

When Rahila was done with her series of casts I thought it would be interesting to do a project with her that would help her have closure with this period of her life. We took a big sheet of paper, and I traced the outline of her whole body, including her newly formed feet. This was such a powerful experience for Rahila. It seemed like it gave her a different perspective from which to see herself. After passively laying down on the paper so I could trace her, she sat up and very actively went to work coloring it in. In this way, we were reenacting the therapeutic process from start to finish. She was a bystander at first, merely looking on while the action took place without her. But with time, she realized that she is full of potential and full of color. She began to take the initiative, and began to show me (and perhaps herself) what she is capable of doing. 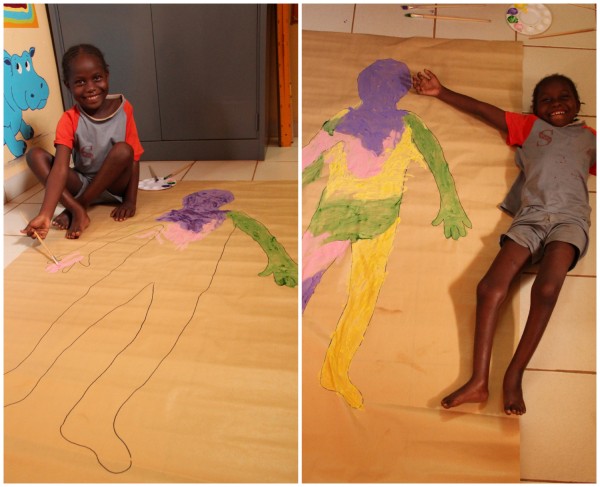 When it was finished, Rahila took the picture home with her as evidence of what she was and what she has become. She was very proud of it. In a way, it was a monument to what she had been through. It commemorated her struggle and commemorated her victory. It was a reminder that the lines that trace the outline of our lives, the things that define us, can be changed and colored over. Rahila left with this image of her body on paper and a new image of herself in her mind. 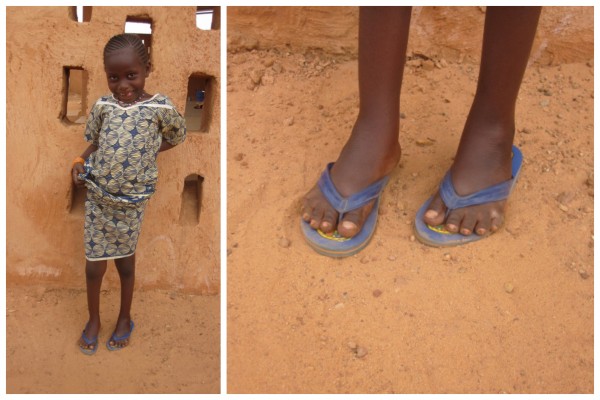